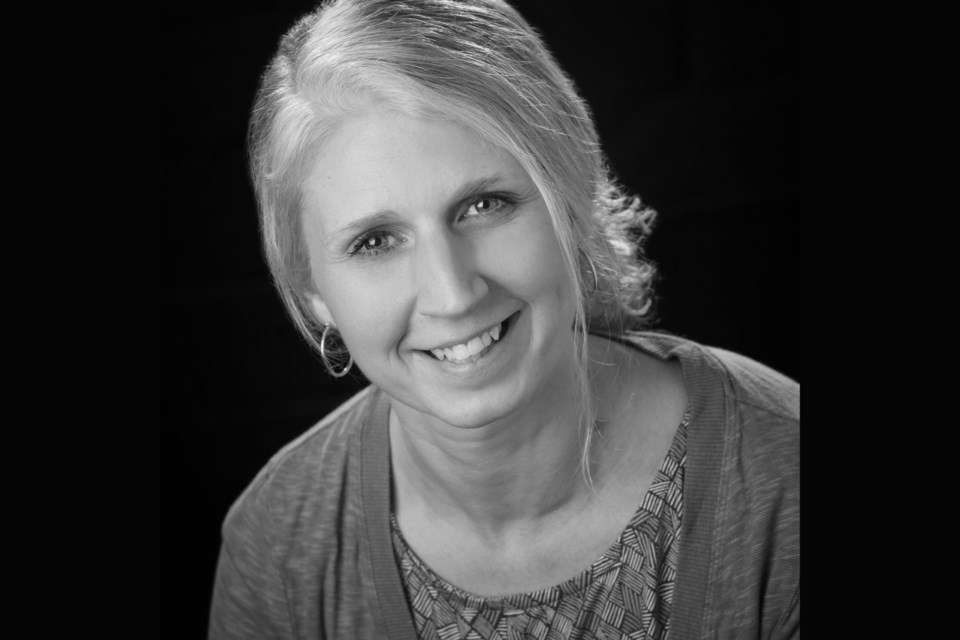 Melissa Shaw is one of this years’ four Gaslight Tour playwrights who have written about the history of Collingwood women. Photo by John Knox

Melissa Shaw, museum assistant at Collingwood Museum said she came across a photo of a women’s hockey team taken in Collingwood on Pine Street.

Until this year, the information for the photograph remained lost. But on another search, she came across the information and discovered the history of women’s hockey in Collingwood goes back to 1897.

The photograph of the team was donated by Helena Elworthy Phipps in 1925. It shows the group of women in full dresses, hats, and corsets with hockey sticks in hand.

Helena was one of three sisters on the team, most of which was made up of Collingwood’s well-to-do families. The players were nearly all single with one exception, a Mrs. Vernon.

Shaw found a newspaper article from an early game played in Thornbury.

In the early days of women’s hockey, newspapers described a “pretty game” though commented the women played well. In the 1930s, descriptions degraded to tales of hair-pulling and scratching.

Based on Shaw’s research, women wore full-length dresses and corsets well into the 1910s, and she was able to use that fact to inject some humour into her play, which features a hockey game at the Collingwood arena in 1897 and explores the physical and societal constraints women faced.

Her play focuses on Helena, who begins to ask questions about those constraints and thinking about the current women’s movement going on around her. Helena’s brother tries to help coach the women’s team, which includes his three sisters.

“The characters kind of came easily,” she said. “And siblings can do and say things to one another other friends wouldn’t.”

As a museum assistant, Shaw dives into the research for her plays, and one of the unique characteristics she discovered when researching this women’s hockey team, was the chance to learn something about women who made it into historical archives under their maiden names and not for any family scandal.

For the most part, women were identified by the title Mrs. followed by their husband’s first and last name.

“We don’t know the women who had an impact on Collingwood because their history isn’t written,” said Shaw. “They were secretaries, nurses, caregivers, teachers … they had some of the most important roles but they aren’t written about.”

“I didn’t know anything about the Elworthy family,” said Shaw. “I like being able to bring that story back.”

The Gaslight Tour features four 20-minute plays performed at four undisclosed locations around town. The audience walks from play to play. Each play matches the theme of the year and tells the true history of Collingwood’s people.